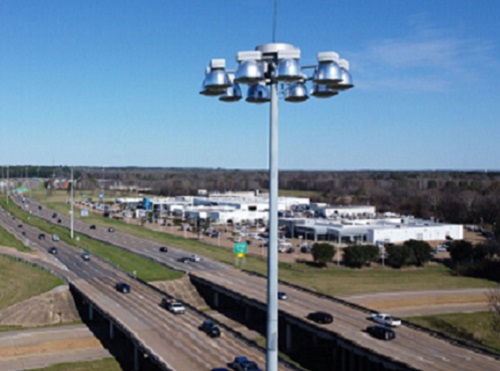 The Mississippi Department of Transportation recently highlighted the growing issue of copper wire theft in the City of Jackson metropolitan area.

[Above photo by the Mississippi DOT]

The agency noted the latest such heist resulted in the theft of 2,500 feet of copper wires to the interstate lights at Pearl Street and I-55.

“We’ve had 18 different locations where this has happened that left us with interchanges and roadways in the dark,” noted Brad White, Mississippi DOT executive director, in a statement. “The value of this specific location at Pearl Street is about $13,000.”

A previous theft of copper of wires to the lights at Waterworks curve was valued at $30,000 and the cost to taxpayers to replace stolen wiring is even greater. Brian Ratliff, Mississippi DOT chief engineer, noted that thieves are putting themselves and motorists at risk when conducting such heists.

“We went up there and looked at the [interstate light pole] structure mounted pull box. They’re busting those apart,” he explained. “They’re either hooking to a vehicle with a rope tied to our copper wire that’s inside the conduit mounted to the bridges and they’re pulling it out, rolling it up and getting away.”

White added that his agency is working closely with law enforcement to develop measures to stop the wire thieves before they strike again.

“We are looking at [installing] cameras that can maybe help us help the law enforcement agencies locally identify who is doing this,” he said. “We’ve talked frankly about leaving the lights on all the time and putting up warning signs and other things that we’ve go live wire there.”