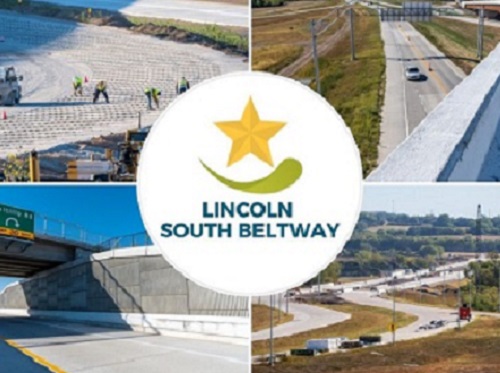 [Above photo by Nebraska DOT]

“Completing the Lincoln South Beltway has been a priority of my administration,” noted Gov. Ricketts in a statement. “Whether driving their kids to school, getting to work, or delivering essential goods, all Nebraskans in this region will benefit from this 21st century infrastructure.”

In February 2019, the agency said it would use an “innovative financing approach” to accelerate project construction so the Beltway could be built in three years and completed in 2022 but paid for the eight-year time frame laid out in in its original plans.

“The Lincoln South Beltway has been talked about since the late ‘60s because of its potential to improve mobility, safety, and help grow Nebraska,” the governor explained back in 2020 after construction on the Beltway got underway.

“The passage of the Transportation Innovation Act, along with continued innovative approaches from the Nebraska DOT helped move this project forward,” he said. “These initiatives, along with Senator [Deb] Fischer’s Build Nebraska Act and extensive partnership with our [state] Federal Highway Administration officials, helped us reach this point.”

“Many people played key roles in getting this work accomplished,” added John Selmer, director of the Nebraska DOT. “As with any large project, it takes hours of work and sustained partnerships to get across the finish line. We have many to thank.”