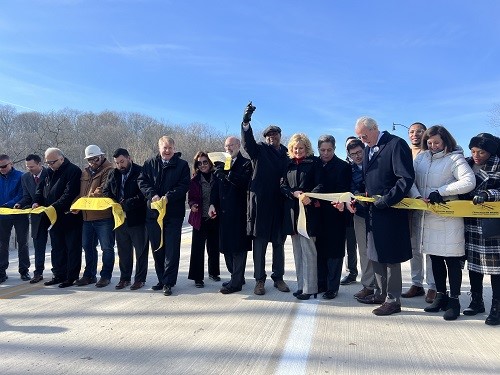 The Pennsylvania Department of Transportation, Governor Tom Wolf (D), and the City of Pittsburgh hosted a ribbon cutting ceremony for the rebuilt Fern Hollow Bridge in Pittsburgh, which is expected to reopen to traffic by the end of December. That bridge suffered a catastrophic structural collapse in January.

[Above photo by the City of Pittsburgh]

Immediately following the collapse, the governor and Pittsburgh Mayor Ed Gainey (D) issued a “Declaration of Disaster Emergency Proclamations,” permitting the city to enter into a legal agreement with PennDOT to manage the design and construction of the new Fern Hollow Bridge.

Those proclamations also allowed the Federal Highway Administration and PennDOT to immediately approve a contract with Swank Construction Company and HDR for the removal of the collapsed structure as well as and the design and construction of the replacement bridge.

“I was here on January 28 to survey the damage from the collapse, and today, less than a year later, I stand before a bridge that is nearly ready to reopen to traffic,” said Gov. Wolf in a statement.

“This is the power of government working for the people in Pennsylvania,” he added. “I’m thankful to all of our partners in state, local and federal government for your partnership and coordination to rebuild the Fern Hollow Bridge in less than a year. It’s an honor to be here to celebrate this incredible milestone for Pittsburgh.”

Thanks to collaboration with the City of Pittsburgh and “innovative approaches” deployed by PennDOT, multiple design and construction phases occurred simultaneously so a new Fern Hollow Bridge could be built in less than a year after the collapse of the original structure.

“This new bridge is the result of incredible collaboration,” stressed PennDOT Secretary Yassmin Gramian. “And thanks to the federal investment, we were able to quickly mobilize to rebuild this bridge without impacting funds for other important projects.”

PennDOT noted that substructure, superstructure, and concrete deck placement work for the new Fern Hollow Bridge has been completed, while Bridge deck overlay and wing-wall work will continue through the spring of 2023.

Bridge barrier installation, pedestrian railing, and line painting should be finished by late December to allow the bridge to open to a single-lane of bi-directional traffic even while ancillary while work continues into early 2023.