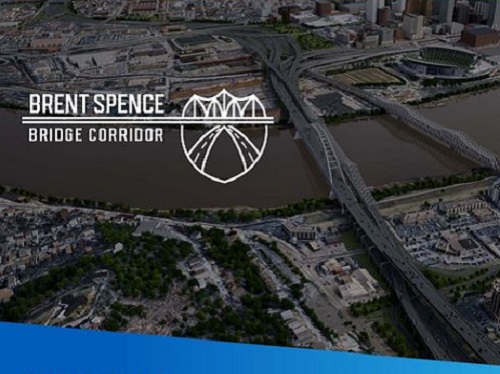 The $3.6 billion Brent Spence Bridge Corridor recently received more than $1.6 billion through a combination of federal grants – giving the project the “green light” to begin moving toward the start of construction.

That funding follows a project revamp completed in July 2022 as well as a joint appeal by Ohio and Kentucky in August 2022 for more federal funds.

The Brent Spence Bridge – built in the 1960s – is a key link in the I-75 freight corridor stretching from Canada to Florida. It now carriers 160,000 vehicles per day – twice the volume it was originally designed to handle – and the resulting traffic congestion impacts commerce and commuters who travel the corridor.

The joint Ohio-Kentucky project calls for the construction of a companion bridge to the west of the existing Brent Spence Bridge, as well as improvements to the current bridge and the roadway network that ties into each river crossing.

In Ohio, the project also includes plans for “enhanced pedestrian access” across I-75 in Cincinnati to reconnect downtown with western neighborhoods and the City of Cincinnati will regain nearly 10 acres of land to develop in the downtown area.

In Kentucky, the project will include a new storm sewer system to reduce flooding and improve local roads, including enhanced pedestrian and bicycle facilities, in the area of the existing and new bridge.

Selection of the Design Build contractor for the bridge is the next step for the project team – comprised of representatives from the Ohio Department of Transportation and Kentucky Transportation Cabinet. Request for Proposals are scheduled for release to the contractor community in January, with project groundbreaking anticipated in late 2023 and larger construction activities to follow in 2024.

[Editor’s note: KYTC closed the bridge following a truck crash and fire on November 11, 2020, that damaged its decking and steel beam supports. The bridge re-opened on December 22, 2020, one day ahead of the emergency project’s scheduled completion date. That KYTC repair effort was also a finalist in the 2021 America’s Transportation Awards contest.]

Substantial completion on the project is slated for 2029, according to a joint statement by Ohio Governor Mike DeWine (R) and Kentucky Governor Andy Beshear (D).

“Ohio and Kentucky have been discussing the Brent Spence Bridge Corridor Project for almost two decades, and now, we can finally move beyond the talk and get to work,” said Gov. DeWine.

“This project will not only ease the traffic nightmare that drivers have suffered through for years, but it will also help ensure that the movement of the supply chain doesn’t stall on this nationally significant corridor. I’m grateful to the teams in both states who have worked so hard to make this project a reality.”

“I’m thrilled the time has finally come for us to get the companion bridge built,” Gov. Beshear added.

“Funding and constructing the Brent Spence Bridge Corridor Project is more than the fulfillment of my administration’s promise,” he said. “Once complete, drivers will have a more enjoyable and efficient drive and we’ll have the infrastructure in place to support the booming economy in this part of the state.”