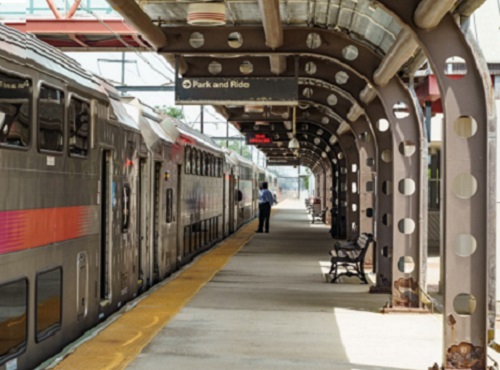 The Federal Railroad Administration recently issued a notice of funding opportunity that makes nearly $9 billion in grants available to upgrade and expand passenger rail services along the Northeast Corridor or NEC. Funding applications are due by March 27.

[Above photo by NJ Transit]

The FRA said in a statement that those funds will flow from its Federal-State Partnership for Intercity Passenger Rail grant program, which is funded at $36 billion over the next five years from the $1.2 trillion Infrastructure Investment and Jobs Act or IIJA enacted in November 2021.

The agency added that the NEC – which stretches from Washington, D.C., to Boston – is one of the highest-volume rail lines in the world and encompasses an area that accounts for 20 percent the country’s gross domestic product.

In addition to the availability of nearly $9 billion in federal grants, the FRA is devoted a number of resources to improve freight and passenger flow along the NEC.

In November 2022, the agency issued a list of priority projects for the NEC to provide a “systematic approach” for the improvement and development of this corridor, which serves as the commuter and intercity passenger rail backbone of the region’s railroad network.

Specifically, the list creates a project pipeline to assist Amtrak, state departments of transportation, and the public with long-term planning efforts to improve rail service along the corridor.

FRA said its list would guide up to $24 billion in funding it is investing in NEC intercity passenger rail service through its Federal-State Partnership for Intercity Passenger Rail Program.

That follows upon the release of CONNECT NEC 2035 – a $117 billion 15-year multi-agency action plan to renew the Northeastern U.S. rail corridor – in July 2021 by the Northeast Corridor Commission

That plan – commonly known as C35 – involves Northeastern state governments and state DOTs, the federal government, eight commuter rail agencies, and Amtrak working together through the NEC Commission to develop a “detailed and efficient sequencing” of infrastructure investments covering 150 projects and capital renewal efforts along the corridor.