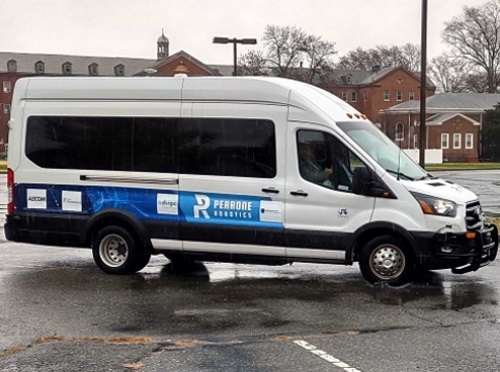 The Pennsylvania Department of Transportation is participating in autonomous transit vehicle testing in Philadelphia, along with researchers from Drexel University and consulting firm AECOM.

The testing involves a mid-size electric autonomous shuttle bus shutting passengers from the Philadelphia Navy Yard to the Southeastern Pennsylvania Transportation Authority’s NRG Station through the spring of 2023.

This marks the first autonomous vehicle or AV testing of its kind on Pennsylvania’s roads since former Governor Tom Wolf (D) signed legislation in November paving the way for commercial AV testing and deployment.

The Philadelphia Industrial Development Corporation leads the development and site operations for the Navy Yard, including its Navy Yard Transit program. The AV project will support a growing community of 15,000 employees, 8 million square feet of mixed-use facilities that includes office, industrial, research and development, life sciences and institutional space, with plans to add additional office, laboratories and clean spaces, retail, restaurants and hotels, and residential buildings, parks, greenways, and amenities over the next 20 years.

Virginia-based Perrone Robotics is providing the AV test vehicle — an Americans with Disabilities Act-compliant mini-shuttle that holds a wheelchair, plus nine passengers — and its automated driving technology will direct the vehicle along with a back-up operator for the first phase of the project.

Before the program is fully deployed, it will undergo rigorous testing — led by experts from PennDOT and AECOM — to ensure the technology can improve safety and mobility on city streets and through construction zones.

The first phase of the pilot will consist of testing, training and analyzing the shuttle’s performance in augmenting existing transportation services between key locations in the Navy Yard. Once this testing is complete in early 2023, Phase 2 will deploy the shuttle to connect the Navy Yard to SEPTA’s NRG Station on the Broad Street subway line, adjacent to the Sports Complex and FDR Park.

During Phase 2, Drexel researchers will study the shuttle’s interaction with its traffic environment and collect data on the public’s perception through the first 12 months of its operation.

“Our team will document and inform PennDOT and project stakeholders on how the AV shuttle interacts and performs under various traffic conditions, and on how riders react, interact, and produce opinions about the AV shuttle experience,” said Jonathan Spanier, department head of Mechanical Engineering and Mechanics for Drexel’s College of Engineering, in a statement.

“This work will help to ensure that future deployments in public transit are successful, where safety and accessibility are paramount,” he added.

State departments of transportation across the country have supported and participated in a wide variety of AV test efforts.

In March, the North Dakota Department of Transportation issued funds to support a range of autonomous systems research aimed at helping the agency develop and maintain the state’s transportation system.

Meanwhile, the Virginia Department of Transportation helped vehicle maker Audi of America test a cellular vehicle-to-everything or C-V2X system over a two-year period that incorporated autonomous operations as well as other safety innovations.