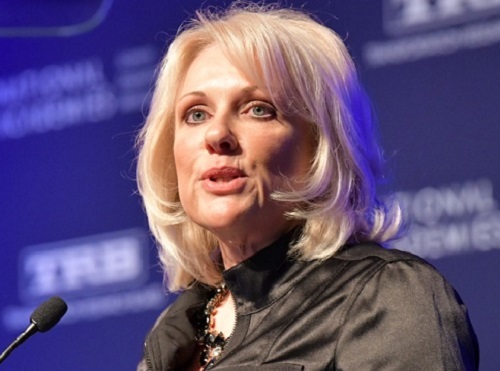 During her keynote speech at the 2023 Transportation Research Board Annual Meeting, Jennifer Homendy (above) – chair of the National Transportation Safety Board –  cautioned that the push to electrify the nation’s transportation system should not come at the expense of roadway safety.

[Above photo by TRB]

“I want to take a second and mention that I’m concerned about the increased risk of severe injury and death for all road users from heavier curb weights and increasing size, power, and performance of vehicles on our roads – including electric vehicles,” she said in her remarks.

“A GMC Hummer EV weighs over 9,000 pounds, up from about 6,000 pounds. Its gross vehicle weight rating is a staggering 10,550 pounds. The battery pack alone weighs over 2,900 pounds — about the weight of a Honda Civic,” Homendy emphasized. “The Ford F-150 Lightning is between 2,000 and 3,000 pounds heavier than the non-electric version. The Mustang Mach-E, Volvo XC40 EV, and RAV4 EV are all roughly 33 percent heavier. That has a significant impact on safety for all road users.”

While stressing that she fully supports the Biden administration’s commitment to phasing out carbon emissions – “I firmly believe it is a human right to breathe clean air,” Homendy noted – she said the nation must be careful that it isn’t creating “unintended consequences” from the push for more EVs – more death on the country’s roads.

“Safety, especially when it comes to new transportation policies and new technologies, cannot be overlooked—ever,” Homendy stressed. “We’re fighting for the 43,000 people who die annually on our roads and the millions more who are injured. Not just drivers, but all road users. No matter their race, ethnicity, ability, income, or where they live. No matter whether they’re walking, biking, rolling, or driving.”

She also emphasized that the transportation community must not “forget what we’re fighting for: zero [deaths] in every mode of transportation.”

While Homendy conceded that “plenty of people” think zero deaths is an unrealistic goal, she and the NTSB believe no death is acceptable.

“Not a single life lost. Zero,” she pointed out. “We must care about the safety of strangers: people we will never meet. Because it’s the right thing to do. It’s what drives everyone at the NTSB and many of you.”