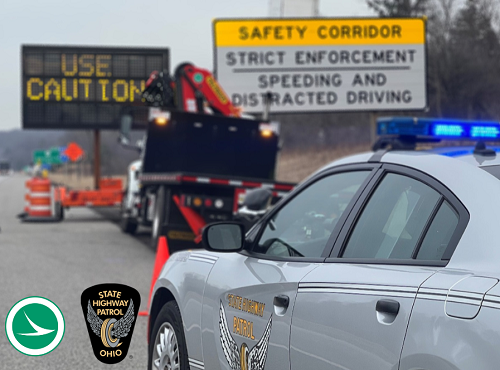 The Ohio Department of Transportation and the Ohio State Highway Patrol (OSHP) are planning to establish another Distracted Driving Safety Corridor along a section of I-77 between state Route 18 and state Route 21 in northern Summit County.

From 2019 to 2022, the agency said this particular section of I-77 experienced 755 crashes resulting in 198 injuries and four fatalities.

That eight mile stretch of I-77 will be clearly marked with new signage alerting motorists when they enter and exit the corridor, as well as the importance of safe driving habits, to help reduce crashes, injuries, and fatalities.

Those signs are being relocated from the previous Distracted Driving Safety Corridor on I-77 between Faircrest Street and Wise Road in Stark and Summit counties. During the two years that corridor operated, overall vehicle crashes decreased by 6 percent, while fatal and injury crashes dropped by 13 percent.

That law, which goes into effect in April, makes the use of cell phones and other electronic communications devices while driving a primary traffic offense for all drivers, and allows law enforcement to immediately pull over a distracted driver upon witnessing a violation.

“Ohio’s new law is part of a comprehensive plan to make Ohio’s roads safer for everyone,” said Gov. DeWine in a statement. “By strengthening prohibitions against distracted driving and enhancing patrols in problem areas, it’s our goal to bring about systemic change in driver behavior that discourages the use of electronic devices while driving.”

Ohio DOT said motorists should expect increased patrols and enforcement by state patrol officers along the corridor to discourage dangerous driving behaviors in an effort to reduce crashes. Those efforts will begin once all the signage is installed and will continue through 2023.